Add Your Event
Wednesday, September 23, 2020
7:00 PM
Add to Itinerary
Add to Your Calendar 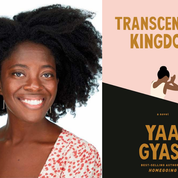 Yaa Gyaski's latest book, Transcendent Kingdom, has rocketed to the No.3 spot on the New York Times bestseller list in its first week - and she'll be at the National Writers Series on September 23rd.

Gyasi's sensational first novel, Homegoing, was a nationwide bestseller that went on to sell more than five hundred thousand copies and became required reading in schools and universities all over the world.

Transcendent Kingdom is a stunning deep dive into the life of a family Ghanaian immigrants in Huntsville, Alabama.  Gifty is a sixth-year PhD candidate in neuroscience at the Stanford School of Medicine who is studying reward-seeking behavior in mice.  Her brother, Nana, was a talented young athlete who got hooked on OxyContin after a basketball injury and died of a heroin overdose before graduating from high school.  Her suicidal mother has taken to bed.  Gifty is determined to find the scientific basis for the suffering she sees all around her.  But even as she turned to hard science to unlock the mysteries of her family's loss, she finds herself hungering for her childhood faith and grappling with the evangelical church in which she was raised.

There's a Morsels book bundle, available for ordering through Sunday, September 19th.  It includes a dozen "Yaa saucy" morsels (apple cider cake with hard cider frosting and salted caramel sauce and a hardcover copy of Transcendent Kingdom from Horizon Books for $40.  The bundles will be available for pick up at Morsels from 8am to 2pm Wednesday, September 23.  Order information is available here.